Posted by Ayesha Patel at 2:43 PM No comments:

The Story Behind the Title

Priya in Heels was a whirlwind to write. I had the idea for almost a year and wrote tiny (and I mean itty bitty) snippets throughout. I knew I wanted the story to revolve around a young, Indian woman torn between the love of her life and her familial obligations. I knew the story would incorporate my life. Once I read my first contemporary women's fiction, which I loved, the inspiration sent my muse into a frenzy.

Priya in Heels was essentially a mad typing dash to the end because I needed to get the story out, laughs and tears and all, and because I needed to know what happens to my main characters. Nothing was planned out. It just happened, so writing the book was as much as a new exploration for me as it will be for readers.

Great. The book is done. The only problem was the title. For the life of me, I've never had such a difficult time creating a title. A few words to capture the entire story is a lot harder than one may think. Normally, I have the title before half the book is written, sometimes even before I begin writing. I went through a couple of ugly titles with my first batch of queries. A title may make a difference if it's not eye-catching enough. Why would any agent or editor want to read further if the title is horrendous? I had titles about chasing Bollywood dreams and good girls who rebel. Boring. Ugh. And ugly. Blah.

I concentrated on the opening pages and a common, subtle theme throughout. You know what? Priya hates wearing heels. She's a medical resident, for goodness sake! She's on her feet 12-15 hours a day for 6 days a week. Her feet hurt. She needs good orthopedic work shoes. By the time she gets home, she just wants to veg in the tub, sit at the table and study, or lounge around on the couch with a cup of something. Notice, all these things take place in her apartment, void of shoes. She's not a going-out-type of girl. Would you be if you had that type of workload? Rotations, clinic, rounding, surgery, deliveries, intense medical stuff, which does require some literal running around.

Throughout the book, Priya's best friend tries to get her to wear heels and go out. It's like dragging a dead weight. She wears heels in pivotal scenes. Going from comfortable, all-that-she-knows-sneakers to feminine, drop-a-man-to-his-knees heels, she transforms. There's that awkward, painful breaking in the shoes part. Then there's that sudden comfort where a woman can run free or walk out on her own without tripping. Yep. These heels are metaphors, as it turned out. I didn't plan it that way, but now that I think about it, it sounds kinda deep, doesn't it? 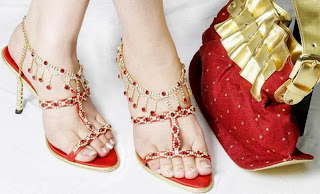 Posted by Ayesha Patel at 11:47 AM No comments:

Email ThisBlogThis!Share to TwitterShare to FacebookShare to Pinterest
Labels: Priya

My new book, the multicultural contemporary NA that landed me an agent and a book deal with Entangled Embrace, is called…wait for it…

PRIYA IN HEELS
Blurb, cover, and release date coming soon. So, stay tuned. Until then, please check out my first interview as Ayesha Patel with my agency sister, funny as heck Ami.

Posted by Ayesha Patel at 9:23 PM No comments:

As you know, I signed with an agent last month and last week, I signed a book deal with Entangled's new Embrace line! Many of you are familiar with Entangled. They are a powerhouse and are going forward like there’s no flipping tomorrow. So many of their books have become bestsellers and optioned for movies. Some of my favorite authors are with them, so I’m over the moon to be a part of their fabulous, blockbuster team.

My book is a multicultural contemporary NA. I can’t say much about it, yet, but it’s about an Indian medical resident whose cultural and familial obligations clashes with her heart. It’s loosely based on personal life events. There’s some romance, comedy, cry-in-a-corner-because-THAT-happened, and a whole lot of Indian culture. It will take you through my hometown in Texas all the way to the place of my birth in colorful Gujarat, India. You’ll definitely pick out my love for plaid and all things geek. I’m SO excited! This book is a big part of me. Yes, every book I write has a place in my heart, but this book is me.

As if my man wasn't the best already, I came home to this: "For all your recent successes," he said. FYI, that giant bear is over 4 ft. tall! 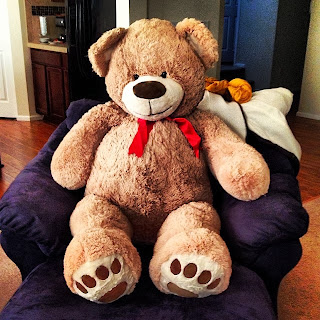 Posted by Ayesha Patel at 12:35 PM No comments: