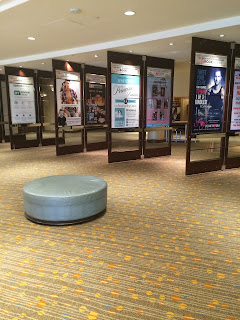 I attended my first RT convention, which also happened to be my first industry convention. Seems a little strange, doesn’t it? Authors should be attending conventions like these, even if it’s on a much smaller scale. It’s a way to get inside information about the business, like what editors and agents want, what publishers are doing, how to market, and writing craft. It’s a great way to get into pitch sessions or meet editors and agents face to face, as well as other writers. Network. Network. Network.

Being my first RT, I hosted a few reader oriented events, but for the most part, I devoured whatever I could, from welcoming events to writer-geared panels to reader-oriented activities to social events. I felt like an in-betweener. A published author but also a rabid reader, and a newbie on top of that. I saw what the giant book fair was like and oh boy, was it huge, and the major signing event Friday night was a bit chaotic because I didn’t expect anything like it. The panels and workshops were as I expected and helpful, and the social events didn’t send me into a corner.

See, I’m not an out-going person. I kept repeating this at RT, only to be told that most writers aren’t. RT is one of the few times we can be because the environment is so welcoming and forgiving. You could start up a conversation with anyone standing in line around you, any random person who walks by. Shoot, I saw Charlaine Harris (yes, that Charlaine Harris) at breakfast, and I just went right up to her and started chatting. Everyone was friendly and easy-going because we were there for the same reason: our love for books. Wether writing them, reading them, publishing them, representing them, marketing them, or buying them. We connected. That’s how comfortable and welcoming RT is.

My schedule was packed from 6:30 am to midnight, there was always something to do, and most of the time, more than one thing to do. The mornings were about information mixed in with fun and giveaways, depending on which workshops or events you attended. Lunch comprised of meeting up with old and new friends.

The afternoons moved along quickly with more classes and the evenings exploded with large crowds at the watering hole, AKA the bar, before the nightly party.

Amid all these events, I met reviewers, a ton of authors both established and aspiring, readers, publishers, editors, and even cover models. I roomed with my good friend, Anna Banks, and we had some time to catch up and chat. I became close to a lot of authors I admire. I met my agent in person for the first time, which was a blast.


I connected with some of my favorite authors. Some of those author highlights were Ann Aguirre, who is hilarious (in case you couldn’t tell from the sparkly unicorn hat)! 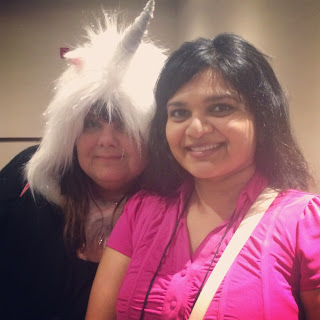 Kiera Cass (and that adorable bun she rocked all weekend), Sara Raasch (because I can’t think of a title that doesn’t sound like hers, we’re going to just use the same title), Sona Charaipotra (who I can text in the middle of the day about random stuff), Sonali Dev and Mina Khan (the world’s biggest sweethearts!), just to name a few. 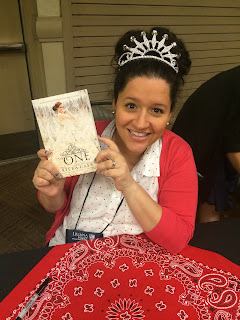 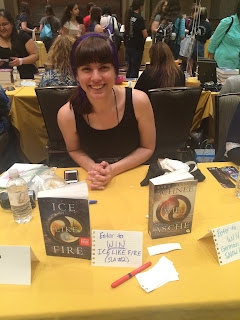 Kathy and Brendan Reichs, I mean who doesn't love Bones? 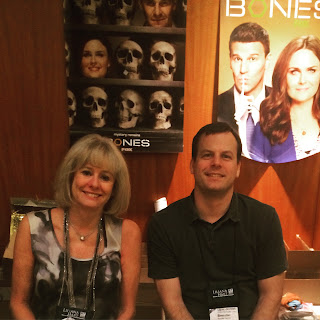 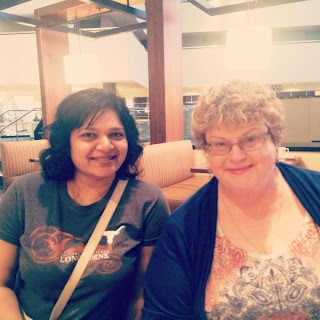 Charlaine Harris at breakfast, as I mentioned earlier FYI, yes, that's me straight out of bed to get breakfast (of course I put on pants and brushed my teeth), but I don't even care that I was so exhausted from a week at RT and had puffy eyes. As my friend told me, Are you sure you’re not a dude, cuz you got some balls (from cotton balls to donut balls, I really don’t understand her infatuation).

My biggest meet was the incredibly talented Meg Cabot (who absolutely rocked those six-inch adorable wedges). I loved her Princess Diaries and she is just as friendly and easy to talk to as anyone. 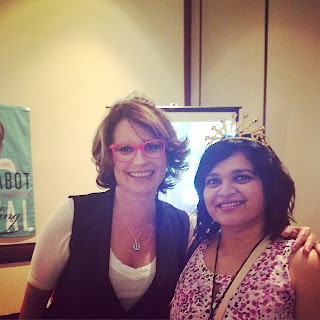 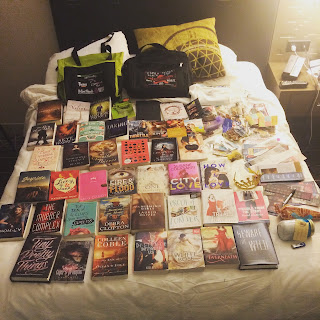 Of course, there was also a lot of swag. I mean, I’ll need another suitcase to get this stuff home. I’d expected maybe eight books, but I’d received over forty not counting ebooks! There were so many totes, bookmarks, postcards, candy, snacks, even jewelry, and other things. Yeah, it was one heck of a takeaway.

But, I have to say that the biggest moment was the teen-day party and seeing all these teenagers fangirling/fanboying and getting misty eyed as they stood in front of their favorite authors. It was truly precious and I was impressed to hear what lengths some of these teens took to get there, to know that reading is not a lame and dying activity, that it is alive and well and thriving.

So, to all the people who rally around books, keep writing, keep reading, and never let the power of a good story fade. I hope to see you at next year’s RT convention, which will be in Las Vegas April 12-17.
Posted by Ayesha Patel at 12:02 PM No comments:

The RT convention is almost upon us, and this year it will be held in Dallas, TX. where I'll be out and about doing all sorts of things. Like workshops, panels, and of course parties. This is my first time at RT, so if you'd like to meet me in person, there are definitely a few times where I'll be hanging out waiting to chat with readers.

Wed. evening at 4pm, I, along with a few very talented and friendly authors, will be at the bar and lounge enjoying the company and inviting readers to sit down and talk with us. Here's your chance to ask some of your favorite authors anything you'd like. 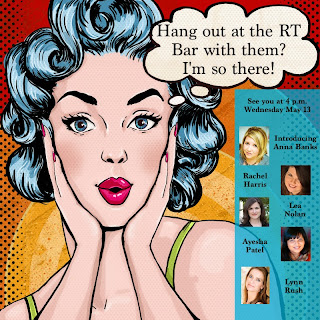 Thurs., from 2:45-5pm, come hang out with me and my fellow Entangled authors to play Candy and Spoons and win lots of prizes, including books! I've never played spoons, so you'll probably beat me at the game!

Sat. 2-3, join us for pizza and chat with your favorite Fierce Reads authors!

And, don't forget Saturday is the BIG day for all readers. The giant book fair, and yes, it is giant, but no worries, this year, the authors will be in a giant room, but divided by genre and seated alphabetically. It's the fan-tastic day to meet your favorite authors and get lots of autographs, books, and goodies. It's also teen-day, so if you're a YA fanatic, you can't miss this!

RT will be loads of information and fun for me, and loads of fan-girling (or fan-boying) and goodies for you! So what are you waiting for? Join the fun. See you at RT 2015.

Posted by Ayesha Patel at 3:46 PM No comments: